As I said in my Stampin' for the Weekend post, I'd do a little tutorial for you, on how I made my card. Unfortunately, I had the bright idea to do the tutorial AFTER I had finished my card, so I've made another, in a step by step process, taking photo's (Bad ones I might add) along the way.
Have fun...! 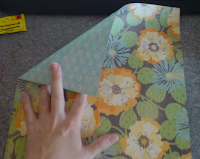 Fold your card stock in half, then turn it over and fold the other direction so your card stock has four sections. You should have a mountain and a valley fold. One for each side. 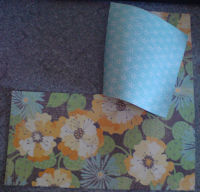 Leaving the card this way, take the bottom right corner and fold to the centre. 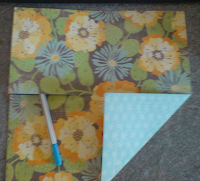 Again, leaving the card this way, take the bottom left corner and leaving approx 2cm or 2.5cm from the cut edge and also the bottom edge, fold to make a smaller triangle fold than the one that is opposite. 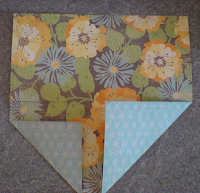 Once you have made this smaller triangle fold, fold it in on itself, so that it is tucked underneith. 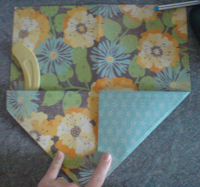 You are now ready to fold your card.

Take the quarter section that you have just folded the triangle underneith itself and bring across to the opposite folded triangle. Then taking that, fold it upwards. 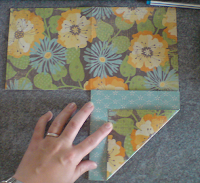 You should now be able to see where your pockets are going to be!

Fold the single quarter left over on the left hand side under itself to make the back of the card. 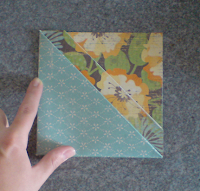 The above picture should look like your nearly finished pocket card! 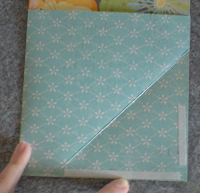 Take some double sided sticky tape or fast drying glue and place a line along the bottom and side of the triangle. Fold upwards to secure. 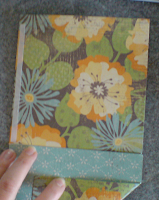 Take another piece of double sided tape and place along the egde of the card, and then fold up the pockets. If you want to, where the blue is on my card on the opposite edge of the double sided tape is a small 2cm gap. You can stick this down with double sided tape or glue to make the edge look neater. If you are planning on putting larger items in this pocket which aren't heavy, it may be an idea to leave it unstuck. 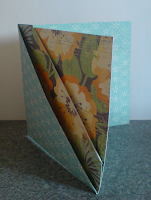 This should ideally look like your finished card!
Its ready for decorating :o)
I hope I've made these steps simple enough for your to understand. If not email me and I'l try and help you out if you went wrong! (which I dont think you will, cos you crafters are an intelliegent lot!
Y Happy Crafting Y

Fab demonstration i shall go give it a try many thanks for taking the time to share.
have a great weekend
tracey

Thanks for the tutorial, Kim! :)

Thanks for the great tutorial, Kim:O)

Brilliant tutorial! love this card, need to have a go at it !
love teen xx

Ahh this is wonderful!! I had a go at a pocket at a Trimcraft demo, but then after sending the card that I made, realised I couldn't actually remember how it worked!!

I won at Sketch Saturday!

I made the top 5 at MDUC

I made the Top 5 at Stamp Something!

Kimmi
West Dorset, United Kingdom
Hi ,I am 27 years old. I have a loving boyfriend of 7.5 years and a gorgeous baby girl called Poppy who has just turned two. I love to craft - Card Making, Scrapping, Painting and Cross Stitching! I was born and bred in the North East of England, but moved to the sunny South Coast of Dorset in 2005. I was Diagnosed with Bowel Cancer in December 2008 - I had half my large bowel removed days after diagnosis and in 2009 I completed six months of Chemotherapy at the end of August 09. I work in a prison as a Staff Nurse, and so far I love it. I'm looking forward to the future and my Craft time is my Escape time!